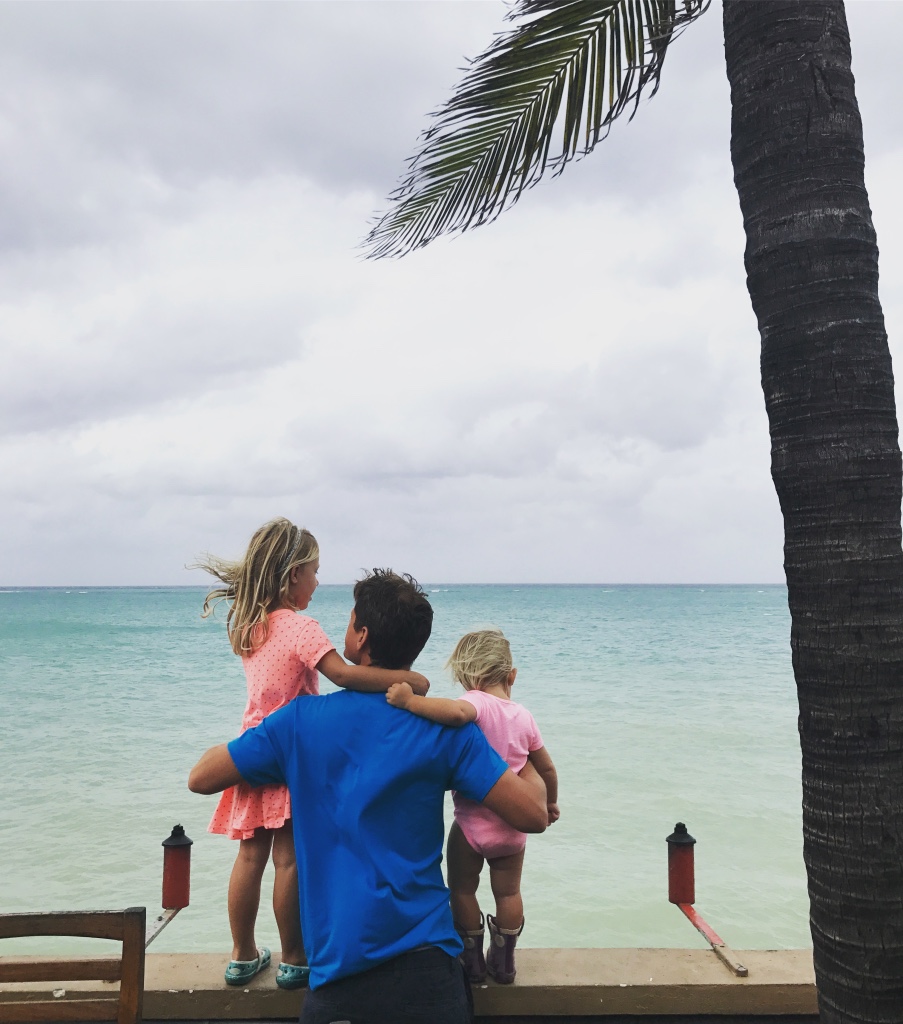 Reader, ‘tis the season. As the mists and mellow fruitfulness begin to gently settle themselves on the hills in the place I was born, here we greet an altogether different season. Here we watch the hurricanes, and here it is the season of fear.

I imagine you too will have been watching the hurricanes this season. Harvey in Texas, where the flooding was as big as everything else in that great state. And Irma across the Caribbean where this weekend the tiny islands that make up paradise were left naked and utterly defenceless against the viciousness of the strongest storm ever to have been recorded in the Atlantic Ocean.

And now in the Bahamas we watch Jose swirling in indecisive, infuriating circles. Wondering where he will go. Will he will blow himself out far away over the sea or will he too gather strength and come this way? Will he pick a random path of destruction across the islands which now feel impossibly vulnerable to the moods of Mother Nature? Uncertainty, hope, and fear.

In October last year Hurricane Matthew roared right over our heads, leaving a trail of destruction in its wake. Its parting gift to me was the fear which has been my constant companion these recent days and weeks. Sometimes it has been quiet, other times it has been like a scratch at the window, irritating and jarring. And in my unguarded moments I’ve let it in, invited it to sit down at the table with me – I’ve feed it, I’ve listened to it. I’ve let it call the shots.

Even in the most mundane of moments fear has been sitting right here on my shoulder, whispering in my ear. Taunting me.

It has been there in the goodbyes to friends who chose or were instructed not to stay and wait out what may or may not come. It has blared from the TV as the excitable tones of the weather reporters tracked the storm’s approach, the urgency of their warnings warranted and helpful – the enjoyment with which they reported it less so. It has reverberated eerily across neighbourhoods as plywood teams cut makeshift shutters to size and drilled them into the concrete of our homes. It has dripped from the tailgates of boats as they have been pulled from the water and spirited away to safer places. It has flashed from my computer screen as I checked and rechecked the websites for storm updates, to be greeted by so many possible scenarios I may as well not have bothered to check at all.

Fear sells. It could be seen in the long lines at supermarkets and hardware stores last week and it will be obvious on my credit card statement for this month as I bought what I thought we’d need in a worst case scenario and then bought twice as much again.

But fear also clarifies. Priorities slide into sharp focus: material things recede into the far distance and we reach for what is important. Our children, each other. (And the birth and marriage certificates which went into a water tight box stored in a windowless room.) The safety of our friends and neighbours. The responsibility we bear to protect the people we love and ourselves as well – because people far away are depending on good news after the storm.

Fear mobilises. The odd jobs that have been hanging around for months got done in double-quick time so as to make our home as safe and clutter-free as possible. The landlord, who tends to go weeks without responding to an email, reacted within hours to have a team of men here to make the house as safe as it could be. The landscaping teams worked overtime and then some to cut away branches and coconuts from trees to minimise the flying debris. The garbage men worked when I’m sure they would have preferred to be home securing their own houses, so they could take away any rubbish and the neighbourhood could clean their bins and get them off the streets.

Fear protects. The safest room in our house was identified and stocked with water, food and medicine – a protected place to ride out the storm if it came to the worst. Senses were heightened; we slept closer to our daughters – or rather, hovered on the edge of sleep, ready to jump up and comfort them at any moment should the wind become savage across the shutters and frighten them.

Fear unites. Neighbours gathered in the streets, discussing possible scenarios and offering support, entirely together in the experience. Text messages pinged from friends far away. Phone calls from home. Their fear for us offered up like gifts, accepted and worn like armour in the hours of uncertainty ahead of the storm.

And then fear’s sweetest of cousins – relief – made to look like king of all lands as it steps out from behind fear’s shadow. Relief that it was all for nothing, all a glorious, miraculous let-down. The storm skirted round us without so much as bringing a single palm frond to the ground. The cyclone which ravaged our island neighbours so mercilessly, spared us almost entirely. The wind raged just enough in the dead of night to remind us of our mortality, our minuscule consequence in the universe, and then moved on.

And it feels like a reprieve. I feel like even now, writing these very words, I am tempting fate. There are still three months of this hurricane season to go, and fear hovers around the edges of our everyday comings and goings. The shutters are still nailed to the walls and I watch the clouds in the sky forming and reforming. There’s a restlessness in the air that I don’t know whether to attribute to forces unseen or simply my own inquietude.

Our good fortune this time round was the misfortune of others. My guilty relief feels callous, my fear a penance. And the season wears on in paradise.