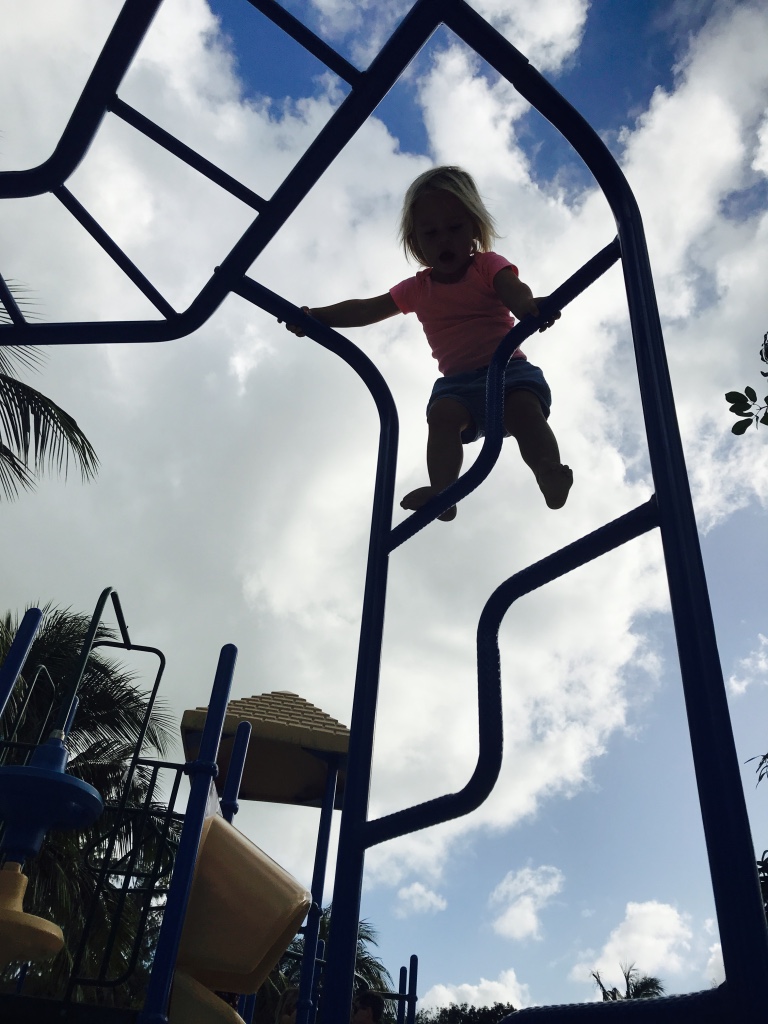 I had forgotten what it was like to hover on the ground below, my heart in my boots, as she climbs higher and higher. “To TOP Mummy!” I had forgotten the fear, the tingling in my fingertips and the sweat on my palms.

I hover, my hands just an inch from the backs of her legs, poised to catch the inevitable fall. She turns. “NO Mummy – I do it! BACK MUMMY!”

I had forgotten the defiance. The stamping of feet and the crossing of arms and the way the word “NO” sounds when it is yelled at toddler-pitch – how that single syllable can burst at its seams with all the injustice and determination and disappointment and guts that a human heart can hold.

I had forgotten the mess. The crumbs and the spills. The new toilet roll, unravelled and stuffed into the bowl in one enormous concertina of destruction. The bottle of bubble bath, emptied in one squeeze into the water and my new lipstick, smeared across a face, never to be the same again (the lipstick, not the face). The contents of my wallet, strewn across the floor. The chaos that reigns.

I had forgotten the noise. The squeals and the chatter, and the theme song to “Sofia the First” sung so marvellously and recklessly off key. That totally unique sound of the Lego box as it’s held aloft upside down so the pieces crash and tumble to the ground, scattering far and wide (a stray one invariably escaping to lie in wait for an unsuspecting bare foot long after I thought I’d tidied them away). I’d forgotten the satisfaction on a small face at having achieved such havoc, as she turns to me with a grin and a deeply insincere, “Sowee Mummy”.

I had forgotten the tug on my heart as she pulls away from me – her fearlessness matched only by my certainty that something unthinkable will happen if I divert my attention for even a moment – because it will! The push and pull of her independence versus my caution, a dance as old as time – one which I’ve done before but am still woefully amateur at.

It’s not for nothing that these days are referred to as the Terrible Twos – they are indeed terrifying. They are ruled by watchfulness and the continual pre-empting of injury – of calculation and negotiation and running after her scooter because there’s a hill ahead that she thinks she can go down as fast as her big sister.

They are days of abandoned cups of coffee and conversations, and reluctantly questioning the necessity of that cherished afternoon nap. Two is exhausting and challenging and terrifying and you think you’re going to lose it as often as not – two is everything it says on the box.

But there’s something wonderful in the terror of two too. Because even as I watch her, she’s changing before my eyes. I didn’t know she could reach the top of that climbing frame – and she didn’t either, but she tried it anyway. I didn’t know she knew the words “amazing” and “flamingo” and “sandwich” and “magic” – but she said them all to me yesterday.

Two is that sweet spot between baby and child. They still make onesies in her size and she still reaches her arms to me for “uppy”. But that little tan line in the roll of her thighs is disappearing as her legs lengthen and will soon be gone forever. Her kisses are still sloppy and baby-like, but now when I ask for one I can see her considering if it’s something she wants to part with. She is leaving her babyhood behind.

But before she does, I’ll hover as close as she lets me. I’ll pick her up when she asks. I’ll get down on the floor and join her in the mess she makes – and I’ll try to take some lessons in fearlessness. This is two. And it’s racing by. 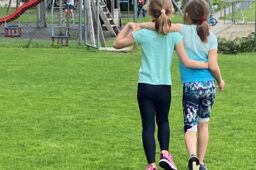