Things to love about the Isle of Man 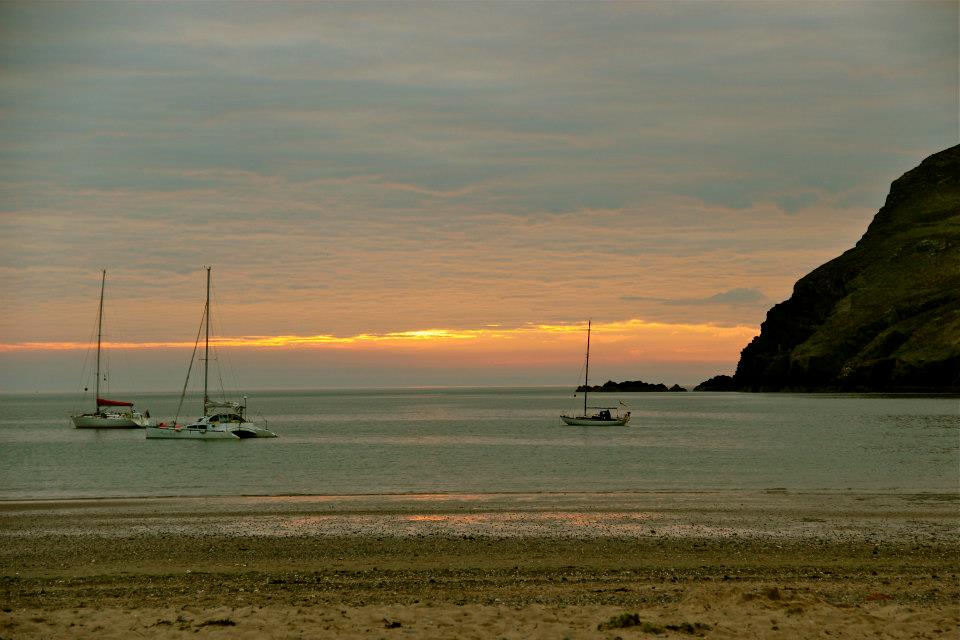 If you or (maybe more likely) your guy are into motorbikes, then you will know exactly where the Isle of Man is. If you’re not into motorbikes you might be vaguely aware of the island as being a tax haven, possibly somewhere in the Channel Islands (it isn’t – it’s off the north west coast of the UK – but you wouldn’t be the first to make this mistake). But if you pay attention to the news this week you’re bound to hear a mention of it. Because this is the week of the year when the Isle of Man trades its sleepy island status and steps into the spotlight as the host of the famous TT races – one of the most prestigious (and dangerous) motorcycle events in the world.

For a fortnight time stands still on the island as bike after bike rolls off the ferry and the Douglas Promenade becomes a week-long party venue. Even as someone who comes down very much on the side of not being into motorbikes, I loved the week of the TT when we lived on the Isle of Man. Last night we watched the day’s highlights on ITV4 and I felt nostalgic and not a little bit proud of the beautiful scenery (what little you could catch as the bikes blur by).

For 50 other weeks of the year, the Isle of Man doesn’t get much attention. So I thought, during a week it’s on the minds of more of us than usual, I’d list some things to love about this little-known destination – which is good for a lot more than just motor bikes.

Those who live there love it

Who doesn’t love a bit of patriotism? And in the Isle of Man, you’ll find it in abundance. It says a lot about a place that its inhabitants are so incredibly proud to live there and most wouldn’t consider calling anywhere else home. Whether it’s their charming 3-legged flag (which legend has it means you’ll always land on your feet), their own currency (although you can use GBP too), their talented sports stars (Mark Cavendish anyone?) or their delicious-doesn’t-cover-it Davidsons ice cream, they’re a proud nation and not afraid to tell you so.

Coastline to take your breath away

Although you get a taste of it if you watch a few minutes of the TT races’ coverage on TV, the island’s coastline really is magnificent. One of our favourite weekend activities when we lived there was to hop in the car on a sunny day (or stormy day!) and drive a full circle of the island – which takes longer than you would think, with a lot more variety than you’d expect. From the drama up north at the Point of Ayre to the charm and beauty of Niarbyl (where you can get a pretty good meal as well), it’s about as gorgeous as it gets. On summer evenings we used to love to eat fish and chips on Port Erin’s sandy beach, sheltered from the wind by it’s position in the bay, and a perfect place to watch the evening sun dip into the sea.

With the island’s position so far west and north, during the summer the sun doesn’t go down until 10pm – what’s not to love about that?!

I’ve never visited anywhere as close to crime-free as the Isle of Man. We seldom locked our front door (certainly never when we were home) and never bothered to lock our car. In that respect it really is like going back in time 50 years, and that’s pretty unique.

Speaking of going back in time… During the summer months, the constant clip-clop of horses drawing their trams up and down the Douglas Promenade is a sound that just becomes part of the landscape. I used to try to learn the names of all the horses and guess which one was which before they got close enough to see their name plates (I particularly loved that they had names like Robert and Mark and John and Philip – so understated). For a good day out (which the kids would love) you can take a horse tram from the top of the promenade into town and then catch the steam railway down to the South of the island – and I promise, you will feel like a member of the Famous Five.

If feeling like the Famous Five is something you think you could take a fancy to, then picture a night on a real-life Kieron Island – the Calf of Man. It’s a nature reserve accessed by small charter boat where you can walk, watch birds, drink lashings of ginger beer and stay the night in a rustic cottage (minimal mod cons…) – go in August when the whole island is covered in bright purple bracken – photo op heaven!

The great outdoors is where life on the Isle of Man truly comes into its own. Kayak past Peel Castle, dive a wreck off the coast, see the coastline from a Segway, mountain bike the endless trails around the island, try rock climbing, horse riding or deep sea fishing, or (my personal favourite), fly through the mud on a quad bike high up in the hills.

I feel so privileged to be able to say I know the real Isle of Man, and to have called it home. A little jewel of an island in the middle of the Irish Sea which is truly its very own kind of paradise – if you’re looking for a holiday destination with a difference (and aren’t too bothered by unpredictable weather) the Isle of Man is a unique and beautiful destination.